Willy ( my eldest son ) made this beautiful clip for the first track off the instrumental album .

I hope you like it . Please feel free to add any comments , i like seeing how it makes people feel.

I had the pleasure of guesting on stage with Augie March last Wednesday the 26th of May at the Melbourne Recital center. It was to be 2 shows but Covid had other plans. The lock down was announced on the night of the second show alas prohibiting the performance . Never the less the Wednesday night gig was so lovely to be a part of. Augie March are a national treasure.

Michelle and i ( Pleasantville ) have decided to make an album of murder-ballads , songs inspired by the true crime podcasts we are way to addicted to.

Here is a taster…

It’s been long over due that i should pen a little note to say how appreciative and proud i am of the Wentworth series . Now after 9 seasons it has come to end in it’s production , i’m sure it will live on and prosper in the world of streaming tv drama . It’s nothing short of a miracle that the final season was successfully completed given the complications around Covid . Largely due to the wise heads and clever people producing the show.

Just a quick glance at my computer shows me that i have written literally thousands of cues for the show, some tiny and barely a note , others long and evolving . Whilst the security of such a long running show will be sorely missed i am looking forward to new horizons ( and a bit of fishing ).

I am busy at the moment creating an album of instrumental music .My aim is to record tracks that would be good to paint to. I have a friend who is an artist who enjoys working with instrumental music playing , he set me the challenge

Today i drove down that old road that leads to Melbourne, I hadn’t been there for ages because of covid restrictions but today marks the beginning of my work on Wentworth FINAL hoorah, i needed to be briefed on my first two Eps . So with official work permit in hand i tackled the traffic.

The final season is kind-of an extension to season 8 – its another 10 episodes . Once again i can say it’s fabulous , heaps of explosive drama . I’m fortunate to be attached to such a cool show .

ps ….. The traffic was fairly light , a freaky perk of the Virus .

My dear old friend and musical colleague Stephan Fidock sadly died a month ago , I just can’t find enough good things to say about him . He was an exceptionally tasteful drummer , an artist , an artisan and a cracking whit . To sum up – he had soul , and heaps of it . Whilst i had lost contact with him over the journey , i had recently ( past 2 years) reconnected after bumping into him in Maldon . His fight with cancer was by all accounts very brave and dealt with in a typically Steph manner , good humor and humility . His two boys Lewis and Ruben who i met properly at his wake were his finest pieces of work , they are both fine men .Whilst they are unique individuals , spend some time with them and you will catch glimpses of Steph’s beautiful soul shining through.

I miss you Steph .

Wentworth volume 2 has been released, it’s on Spotify and Itunes . I listened to those who wrote to me and did my best to include the favourites.

Thankyou to all the people who made suggestions.

Many years ago ( late 80s ) i bought an UN-loved Roland Jupiter 8 , Its the Synthesizer that was the sound of the 80s but like the frizzed up Hair-Do on Howard Jones’s big head it went out out of fashion dramatically around the same time .

I paid about $1000 (They fetch up to $30000 now if you can find one ) and was told by it’s previous owner that it was too heavy to transport. I used it over the years and had a lot of fun .Decades whizzed by and my teen-aged son Willy discovered it and with my blessings began making music with it . After a while he became involved in other pursuits so retired it to his cupboard where it sat for another 7 years gathering dust ….but wait ….. what’s that sound ?,,,,, Yes . something …. something deep within it’s 14 bit Japanese heart was calling me – throb throb buzz buzz woosh woosh ping ping boing . Like a lead character in the 60s TV series Twilight zone i arose with a dead stare and a non negotiable mission to rescue the JP 8 from the dusty cupboard , bring it home , have it lovingly serviced and let the joy of such a wonderful instrument burst forth again. This brings me to where i am now. I realize that i’m so lucky to own one of these highly sort after iconic keyboards . I have totally fallen in love with it and augmented it’s capabilities with a Kenton DCB midi box which allows me to use it from Protools ,sync the arpeggiator etc. Of coarse these days its so easy to find Synth sounds on your computer and they sound pretty good BUT they really don’t sound as fat as these things . Lets face it , if you are using synth sounds from within a computer that can email your mum – it wont sound as good as the real thing.

I have a new TV comedy commission in development which could be a great fit for the JP8 and all signs point to it being a good fit . We shall see. 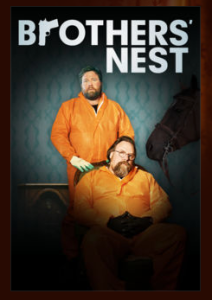 The movie has also been added to Itunes for hire/purchase . If you haven’t seen it , grab some popcorn , get comfy , enjoy the ride .

It’s soundtrack time again , I have been asked to arrange my favorite Wentworth cues for Soundtrack number 2 .

It will draw from seasons 4 5 6 and 7 . Any suggestions are welcome . Just drop me a note explaining the Episode and scene .